The territory of Nocera Terinese is located 20 minutes from the Lamezia Terme airport and in the immediate vicinity of the Falerna motorway junction (A3). 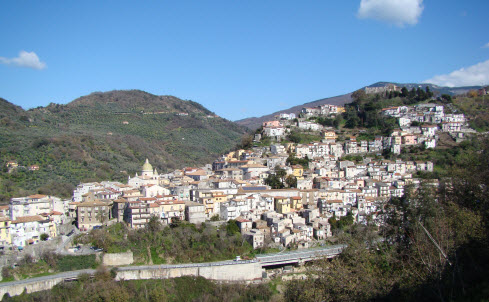 It is among the most extensive in the area and extends from the sea to the mountain reaching the Mancuso mountain (1327 m)
The community, which today registers just over 5,000 residents, is discovering the marine industry with the enrichment of the related services that are added to the presence of tourist villages and second homes distributed on the coastal territory. In recent years the country has seen a redevelopment of the infrastructure that has arisen
spontaneously and an alternative planning of the great natural potential.

L’antico nucleo urbano è posto tra i 250-280 mt. s.l.m., su un modesto promontorio, al centro di strette e verdi valli in fondo alle quali scorrono due impetuosi torrenti.The ancient urban core is located between 250-280 meters. s.l.m., on a modest promontory, in the middle of narrow and green valleys at the bottom of which flow two impetuous torrents.
From these deep natural furrows eroded by the waters breathe the breezes that cool the air in warm periods while the mountains that surround the valleys restrain the cold winds of winter. Nocera Terinese has always been appreciated for the exceptional climatic conditions and for the wealth of fresh and clear springs.
It is known that the Bali of S. Eufemia (the territory was the property of the Knights of Malta) used to vacation just in the palace of Nocera. 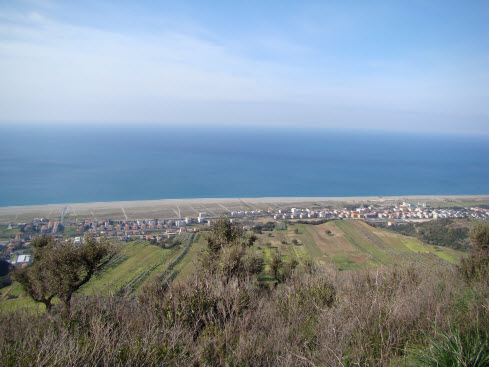 The religious influence of the town is highlighted by the presence in its territory of numerous churches (only six in the urban core) and three convents (Minor Conventual, Capuchin, Augustinians).

Its historical documentation dates back to the fifth century: the geographer Stefano di Bisanzio recalls that the historian Philistus Siracusanus already spoke of Nucrion or Nuceria dei Brezi. The archeologist P. Orsi recognized prehistoric traces of pre-Hellenic character on the plateau known as “Tirena” on which the attention of the archaeological superintendency was concentrated to identify the city buried there: Temesa, Terina or Nucrion? 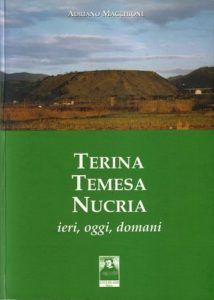 All the history of Nocera in a monumental work. Millennia of civilization and human affairs: from the Magnogreco settlement of Terina, passing through Nucria and arriving, over the centuries, to the kaleidoscopic Nocera of the 2000s.

Adriano Macchione, author of the powerful “Terina, Temesa Nucria” who has consecrated the authoritativeness and the historical competence, confirms him fine and acute scholar, dedicating to his Nocera a work omnia.

In “Nocera terinese: history and stories”, Macchione brings generously to the light and enhances a rich cultural heritage and knowledge, recovering the knowledge of the ancients, “which is the depository of the population that inhabits those places for centuries”.

A meritorious work, the synthesis of a life of studies dedicated to Calabria condensed into four volumes, which give dignity to the present through a meticulous reconstruction of the past.

The ancient importance of the territory of Nocera is deduced from the act with which Frederick II D’Hohestaufen exchanged the fief of Nocera with that of Nicastro; an act that underlines how the two fiefs enjoyed equal economic and social prestige. But of its past you can admire only the remains of extreme cultural interest: the Capuchin Convent which, built in 1581 on the remains of the old Norman castle of which is still part of the perimeter wall, majestically dominates the town proposing itself as a connotation essential for landscape and panoramic identification of the country; the Mother Church of St. John the Baptist, richly decorated with stuccos and furnishings, preserves numerous ancient statues, as well as paintings from the seventeenth and eighteenth centuries, some attributed to Pasqualetti; the wooden statue of the Pietà called the “Addolorata” (17th century) which presents the compositional scheme of Michelangelo and is celebrated during the Holy Week with the rite of the “Vattienti”. It is revered in the Church of the Annunciation which, among other things, is adorned with a seventeenth-century altar in green Calabria marble; the Church of S. Francesco with tufaceous altars of pure renaissance style, triumphal arch (already counted among the national monuments) and airing Arab-Norman forms on which are written indecipherable written; it rests on two octagonal columns with a basket-shaped capital adorned with fruit and leaf motifs and has the base in the shape of lion-shaped feet as well as unusual bas-reliefs placed between the columns and the wall.

Many other cultural assets are scattered in the maze of narrow streets; we mention the most important: the Ligneous Portal of the Church of S. Maria with bas-reliefs of popular Renaissance art, among which the figure of the siren Ligea stands out, a mythical symbol of the origins of Nocera Terinese; the tufaceous arches, with diamond-tipped bosses, in the courtyards of the palaces of the most ancient and noble families; portals, courtyards, larghetti, “vote” and evocative views of the typically medieval urban structure.

There are two moments of considerable social aggregation: the Holy Week, which takes on characteristic features of great historical-cultural-religious content for the “Flagellants”, better known as the “Vattienti”, whose practice dates back to 1777. The other moment social rich in religious meaning is the feast of the patron Saint John the Baptist, which takes place
and on June 24, with a local fair that animates the country for a few days. On the first Sunday after Easter the Annunziata festival is celebrated.

Even Nocera Terinese, although not ideal as Gizzeria, sometimes offers the possibility of kitesurfing if equipped with a kite of the right size (sail surface suitable for medium strength winds).